Under Papuans: From forest nomads and demons

Not many know Irian Jaya (West Papua), the western part of New Guinea, the second largest island in the world after Greenland. Located near Australia. And even less the people living there. Especially the numerous, secluded and often difficult to reach indingenious people with their Stone Age ways of life and rites. Some tribe even awaits discovery. Facts compliant: around 500 independent languages, the last remaining intact tropical rainforest in Asia, the largest biodiversity outside the Amazon, huge mangrove swamps, over 4000 m high glaciated mountains.

This report is mainly about the tribe of the Dani from the highlands of Wamena and about exhausting jungle tours with obstacles to the Kuruwai in the lowlands, secluded people of forest nomads. They live perfectly adapted to the nature in this largest contiguous jungle of our planet, only to reach by day-long marches and boat trips. As secluded shows her name for whites: Laleo, demons. They still live as they did thousands of years ago, yes, some of you can tell how the flesh of people tastes. Ritual cannibalism, which is likely to exist today. But not one that endangers the lives of travelers.

To the picture gallery of – subjectively considered – most beautiful shots of the journey, a small selection

In the north: the Sentani Festival and the provincial capital Jayapura 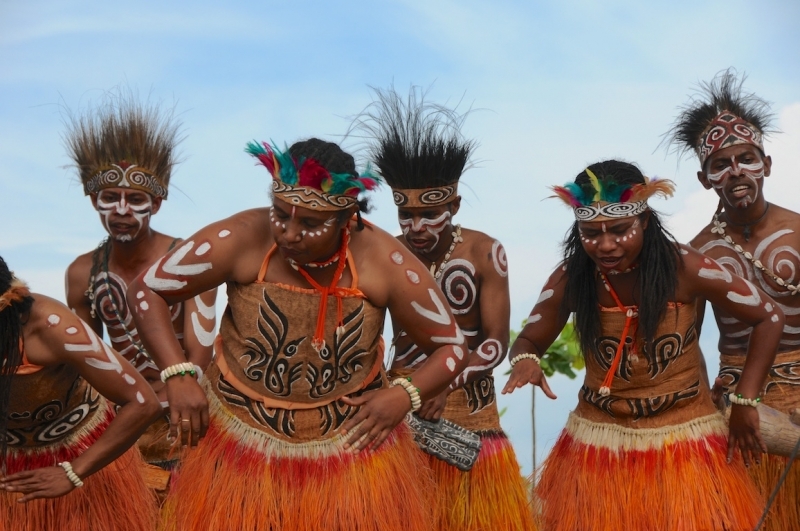 Before we went to the Dani and the Kuruwai, we started our journey first in Sentani and Jayapura, the provincial capital located to the northeast. Directly on Lake Sentani, with about 94 square kilometers and 80 km in length, the largest inland lake of West Papua, is the airfield built by the Japanese in World War II. On the small hill Ifar near the lake was from 1944 the headquarters of the US Army under Douglas MacArthur. The expedition leader Weiglein first came to Jayapura in 1979. „At the time, there were only a few houses around the airfield, everything else was very rural, very simple.“ From the people of the Sentani estimated around 30,000 people live in the area of the lake. They are known for their carvings, men’s houses, richly decorated boats and bark paintings.

Our first destination was the Sentani Festival on the shores of the lake.  It took place in 2012 for the fifth time. „The purpose of the festival is to bring together different groups of people to get to know and understand each other better. Such festivals promote the government, as whole groups are brought by plane or ship for free, „emphasizes Werner Weiglein.  Actually, the Sentani festival is strongly reminiscent of a folk festival. To what we experience later in Wamena and of course on the way to the Kuruwai, there are worlds. Nevertheless, the festival shows something of the culture of the people living here, old traditions play at least in the performances still a role. It features Papuan dances with richly decorated locals, traditional music and singing throughout the day. The competitions and war games show their martial history up close.

In addition, there are numerous opportunities to explore Lake Sentani and its surroundings, such as trips on the lake to individual clans and islands or remnants of the Second World War. In the town of Sentani itself offers a trip to one of the many markets. And, many things may not be suitable for our western stomachs here and the incisive smell, you have to endure. Because cleanliness is not necessarily taken care of here.

Since the provincial capital Jayapura is only about 40 km away, a visit is recommended. Only you should allow enough time. Everything that a car or a scooter possesses is on the only connecting road.  Actually, on the road, a single lunar worm moves from Sentani to Jayapura, and vice versa. Our first stop in a suburb of Jayapura was a seafront port a fish market. The smell was immediately unmistakable again. Freshly caught fish, especially tuna of up to two meters, even individual sharks and much more was expertly dissected. In less than a minute, about a 50 cm long tuna was gutted and filleted. The provincial capital is home to about 100,000 people, around 500,000 live in the entire region.

Picture gallery of the Sentani festival and the capital Jayapura

On we went to a lookout point, a good location to see all over Jayapura. Before that, there was a visit to a small, beautiful museum at Jentrawasi University and, of course, a stop at craft shops selling wood carvings. Man-high shields, bows and arrows, spears, wooden figures from all over New Guinea (also Papua New Guinea), penis quivers and much more. Nothing is really old here, 50 years outdoors correspond to the climate for about 500 years in Germany. That means many carvings simply rot in a few years or are created especially for ritual festivals and then thrown away or burned and recreated from time to time consuming from the head.

Wamena and the Baliem Valley

Landed in Wamena in the highlands after a 45 minute flight in a turboprop we first went to a market, after the bustle of the small airport. ything works smoothly. Outward chaos, but everything works smoothly. On the market: we visited him on the one hand to buy himself, on the other hand meet the tribes of the adjacent area here. Here you can buy fruits, vegetables, fish and meat, clothing, household items, actually everything you need to live and the people exchanged news. Again and again you get shaken by strange men’s hands, many locals are happy about the rare visit. We have not experienced begging, no „fees“ for the photo, a smile or a short conversation is enough (yet). Tourist influences are barely noticeable, visiting only some 1000 to 2000 strangers Wamena per year. Nevertheless, the region, which can only be reached by plane, is considered a tourist stronghold.

Everywhere on the market, especially on the garbage heap, there are pigs. Because of the pigs, the houses and gardens of the Dani are fenced, so they have to stay outside. To protect the vegetable gardens. Pigs belong to the family, are exchanged and acted on special rules, if one is to be slaughtered for a pork festival. Normally the Papuans do not slaughter their own pigs, they raise them from an early age, give them their names and they are sometimes even nursed by the women. For the Papuans, pigs are a status symbol, means of payment, foods for special occasions and a substantial part of the bride price. Incidentally, Wamena translates roughly as „where the pigs live“. 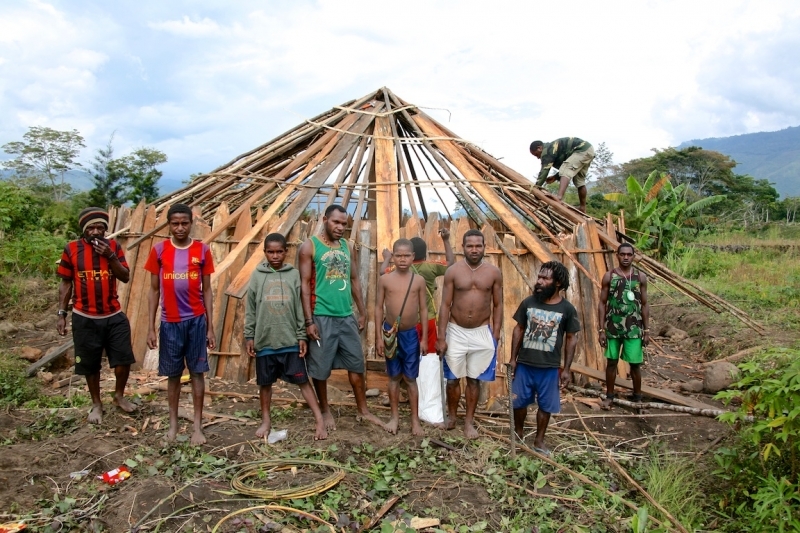 The journey then took half an hour on a rather demanding, bumpy dirt road in an open minibus to the Baliem Valley Resort, our home for the next few days. A beautifully situated on a half-height resort, for the region very comfortable, built in the typical style and brimming with beautiful carvings, numerous signs, statues, dance dresses and much more. Owner is Dr. Werner Weiglein, our expedition leader. The resort is the starting point for hikes as well as for various day trips to the trunk of the Dani or even adventurous tours to expeditions.

The Dani – originally, and yet influenced by civilization

The Baliem Valley in the highlands of West Papua is the settlement area of the Dani tribes, a nation of peasants and hunters. Spotted by whites, the Baliem Valley became 1938. But only now is tourism developing slowly. The reason is the fascinating landscape and the cultural sights. Not a few of the Dani tribes have already adjusted to it. Nevertheless, much originality has been preserved to this day. The valley is about 1600 m high, extends over 12 km wide and 50 km in length. The climate here is similar to Europe in the summer, warm, the humidity is limited, although it rains more frequently. It even gets really cool at night. 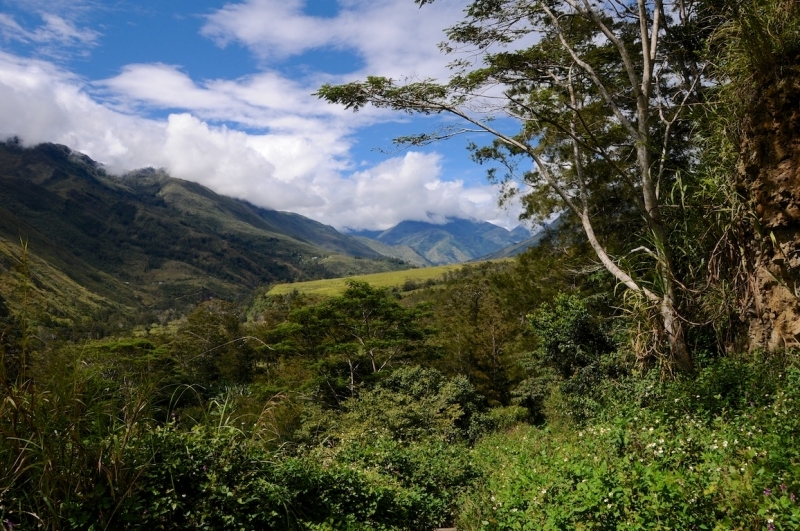 The way of life of the Dani living here clearly differs from the other highland tribes. The most visible sign are their homes. The Settlements are surrounded by palisade-like fencing (we remember: keeping the pigs out), inside are carefully landscaped gardens. Their mansions and family houses are round, while the kitchens and cowsheds are stretched long. Covered are the huts and houses with grass. Men’s houses are usually taboo for women. Retreat for the whole family are the family houses. Such a hut must build the Dani man for each of his women, polygamy is recognized moral behavior. For each woman is also a field to create. Here Dani women grow sweet potatoes, cassava, beans, bananas, sometimes sugarcane, coffee and pandanus. Even pigs have to be kept for the women. Not every man can afford several women.

By the way, you can see older women who miss the topmost or the two uppermost finger-songs on several or all (except the thumbs). A sign of sadness. If a close relative or child dies, they may (or must) sacrifice a phalange. Generally, many mountain papuas are small in stature (around 1.50 m). Cannibalistic practices existed until the 1970s. They were stopped in this area by Christian missionaries, who also provided an end to the numerous tribal feuds, ancient war rituals and ancestral cults. Traditionally, the men outside Wamena wear only one penis case, the Koteka.

Also in Wamena there is recently a festival. It takes place in mid-August and offers show bouts with traditionally dressed warriors. Worth seeing is also the pig race. At this time, most visitors come to Wamena, while in the rest of the year the tourist „onslaught“ is limited.

We certainly visited a Dani hamlet that still houses an ancient mummy of one of their clan ancestors. She should be around 250 years old. In a neighboring hamlet, the Dani showed us their warlike past in the form of a show fight and we were able to participate in a traditional pig festival. A must for every West Papuan visitor.  It is cooked as in primeval times in pits with hot stones. Originally this festival was only at weddings, funerals or special guests. Even today, everything is very original and genuine, no show only for visitors. 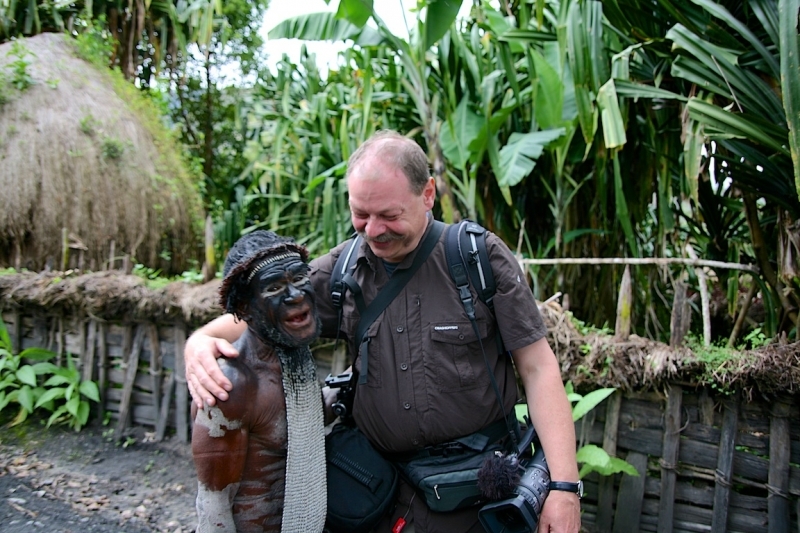 The next day we drove to the southern part of the Baliem Valley. On foot we went through a beautiful landscape, sometimes along the river, sometimes above. The path leads over quaint suspension bridges, past Dani villages, sugarcane groves and terraced fields. Many highlanders outside the Baliem Valley still live on the level of Neolithic peasants, primarily from agriculture. The planting work is done with a digging stick.